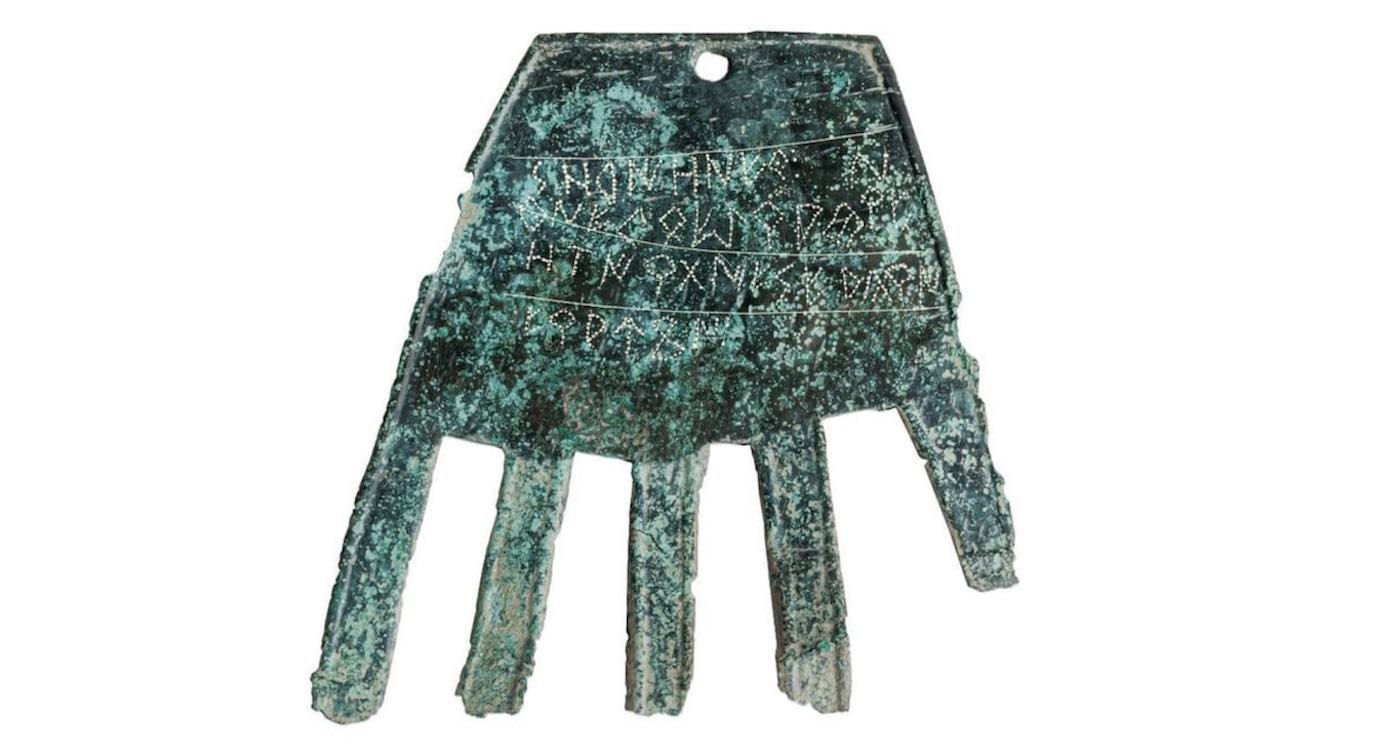 A very peculiar decorative ornament was found in an archeological dig last year in Spain—a bronze amulet shaped like a hand that would lead researchers to a fascinating discovery.

Just recently however, the restoration of the artifact revealed strange words believed to be part of the precursor to the modern Basque Language, also called Euskara.

The Basque Language today is spoken by hundreds of thousands of people in Northern Spain and Southwest France. It is Europe’s only surviving “language isolate,” a term meaning that Basque is not related either to the Greek-Romano language of the south, or the Indo-European Celtic languages from the north and east.

The amulet, found in Pamplona, carries the word “sorioneku,” which closely resembles the Basque word zorioneku, which means “fortunate.” The current theory is that it was hung around the 60s BCE above the door to a mud brick hut.

The researchers at the Aranzadi Science Society haven’t been able to place any of the other words on the hand, which has led to the hypothesis that it could be from the precursor language of the Basque people, before a gradual borrowing of Romance words contributed about 40% of the modern Basque vocabulary.

In fact, the owners of the hand, which the researchers have called the Hand of Irulegi after where it was found, is believed to date to an Iron Age tribe called the Vascones who inhabited Spain’s Navarra region.

“This piece turns upside down what until now we thought about the Basques and writing,” says Joaquín Gorrochategui, a philologist at the University of the Basque Country, in a statement from the Aranzadi Science Society, which has been excavating the site since 2017.

“We were almost convinced that the Basques were illiterate in ancient times.”

It’s possible that Euskara was already fully developed as a language before the turn of the millennium.

The letters on the hand were written by carving out tiny dots rather than straight lines, something that has never been seen in any writing in the ancient Western World.

MORE LIKE THIS: Stunning Ancient Artwork Found at Site Sacked by ISIS: Assyrian Depictions Not Seen For 2,600 Years–LOOK

Clearly the Basque have secrets yet to unveil, and it’s no wonder given the potential cultural development at even so early an age that their language and identity has lasted so long.

A mini-doc was produced on the discovery of the hand which you can watch here on YouTube with auto-generated English subtitles.