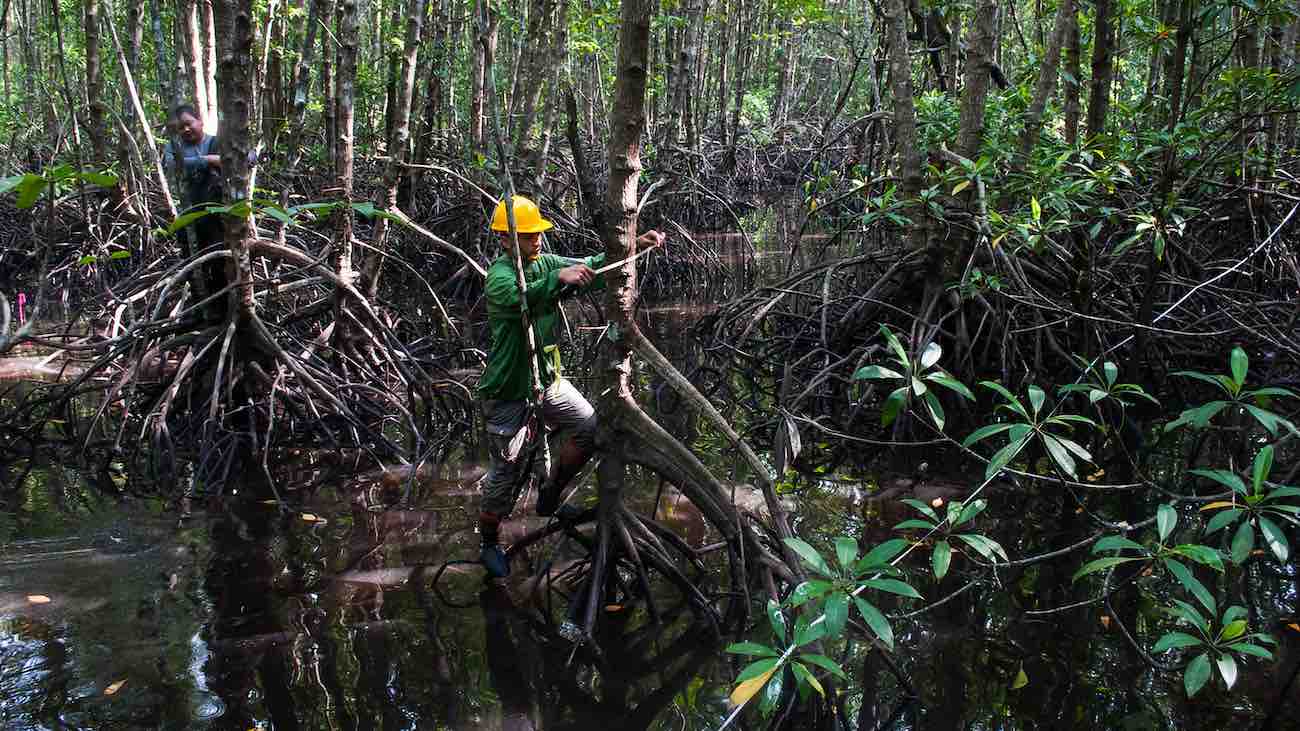 Reprinted with permission from World At Large, a news website of nature, politics, science, health, and travel.

They are one of the most unique and fundamental types of forest on our planet, and for a few decades they were being lost at a rate that seemed soon-to-be-fatal. But with the 2022 State of the Mangrove report, a new picture is emerging of changing trends and attitudes towards these trees, which have a crucial role in easing the effects of climate change.

This is the second annual report, and it uses brand new Global Mangrove Watch satellite maps that provide much better detail for this year’s analysis.

Globally today, 42% of all mangrove forests lie under some level of protection. The updated maps calculate that 147,000 square-kilometers of the Earth’s surface (57,000 sq-miles) are covered in mangroves, more than previously thought.

Conditions for the coastal trees are also improving, not only because of dedicated efforts to reforest mangroves but also because, as climate change policy around the world has narrowed to a carbon-in carbon-out equation, aquatic ecosystems like mangroves have clearly become the most important ecosystems of all.

The report aims to present a clear and simple cost benefit analysis to policy makers to show that for three key issues that face coastal populations, a mission of “halt loss, restore half, double protection,” is the most effective and achievable strategy available.

Conservation outlet Mongabay reported on the summary and detailed that in the aftermath of the December 2004 Asian tsunami that killed 200,000 people, Sri Lankan researchers estimated that—per hectare per household—mangroves, which Sri Lanka had very few of, conferred $14,500 in economic value, in part because they can absorb 70-90% of the kinetic energy of a tsunami wave.

RELATED: Mangrove Trees Can Save Americans Tens of Billions in Flood Damages–So a New Alliance Gets Planting

The State of the Mangrove 2022 estimates that coastal communities near mangroves around the world enjoy protections of property and real estate equal to around $65 billion through this protection from storms and waves.

For this and for other reasons, the report recommends countries and partners work to do three things: halt the loss of mangroves entirely, restore half of what was lost since 1996, which equates to some 1,580 sq-miles of restoration (4,092 km2), and double the area of protected trees worldwide.

With the addition of the new maps, the report has identified around 3,100 sq-miles of mangroves that can be restored (8,100 km2), with a particular focus on Southeast Asia and in countries like Papua New Guinea, Indonesia, and others, where much of the world’s mangroves can be found.

CHECK OUT: A Teen Plants Hundreds of Mangroves to Replace Trees Trampled by Hurricane Irma

Worldwide, around 4.1 million working fishermen rely on mangroves to act as nurseries for all manner of creatures. The executive summary claims that more than 600 billion shrimp and fish, and 100 billion bivalves and crustaceans develop every year in mangrove forests.

Mangroves are critical to an estimated 893,000 small scale fishers in Indonesia alone, while an estimated 82% and 89% of those in Bangladesh and Nigeria fish predominantly in and around mangroves.

LOOK: What Can One Person Do in 10 Years? This Man Got 152 Million Mangrove Trees Planted

But in the halls of power around the world, what will likely evolve to become the real value of mangroves is their potential power for storing carbon. Based on the chemical, geological, and biological reality of growing in waterlogged soil, mangroves are estimated to hold up to four times the amount of carbon as some other forested ecosystems.

Mangrove soils worldwide store the equivalent of 22.86 gigatons of CO2, or around 6.23 gigatons of soil carbon. This is more than half of what the human population currently emits every year.

“The loss of even just 1% of remaining mangroves could lead to the emission of 0.23 gigatons of CO2 equivalent—equating to over 520 million barrels of oil, or the annual emissions of 49 million cars in the US,” the authors write.

YOU MAY ALSO LIKE: Precious Rainforests Are Being Preserved at Highest Rate in 30 Years, After Palm Oil Moratorium in Indonesia

For this reason, the protection recommendations for an additional half of all mangrove forests is critical. The report’s recommended restorations would store another 1.27 gigatons of CO2 equivalent.

Some of the largest restoration programs going on in the world right now include Senegal— where in the regions of Casamance and Sine Saloum, 80 km2 has so far been reforested, totaling nearly 80 million trees—and Indonesia, where President Joko Widodo has attempted to reforest 6,000 km2. China has successfully restored 4 km2 of mangrove forests in Zhanjian, Guangdong province, totaling around 4 million trees.

PREACH Some Gratitude for the Mission of Mangroves On Social Media…