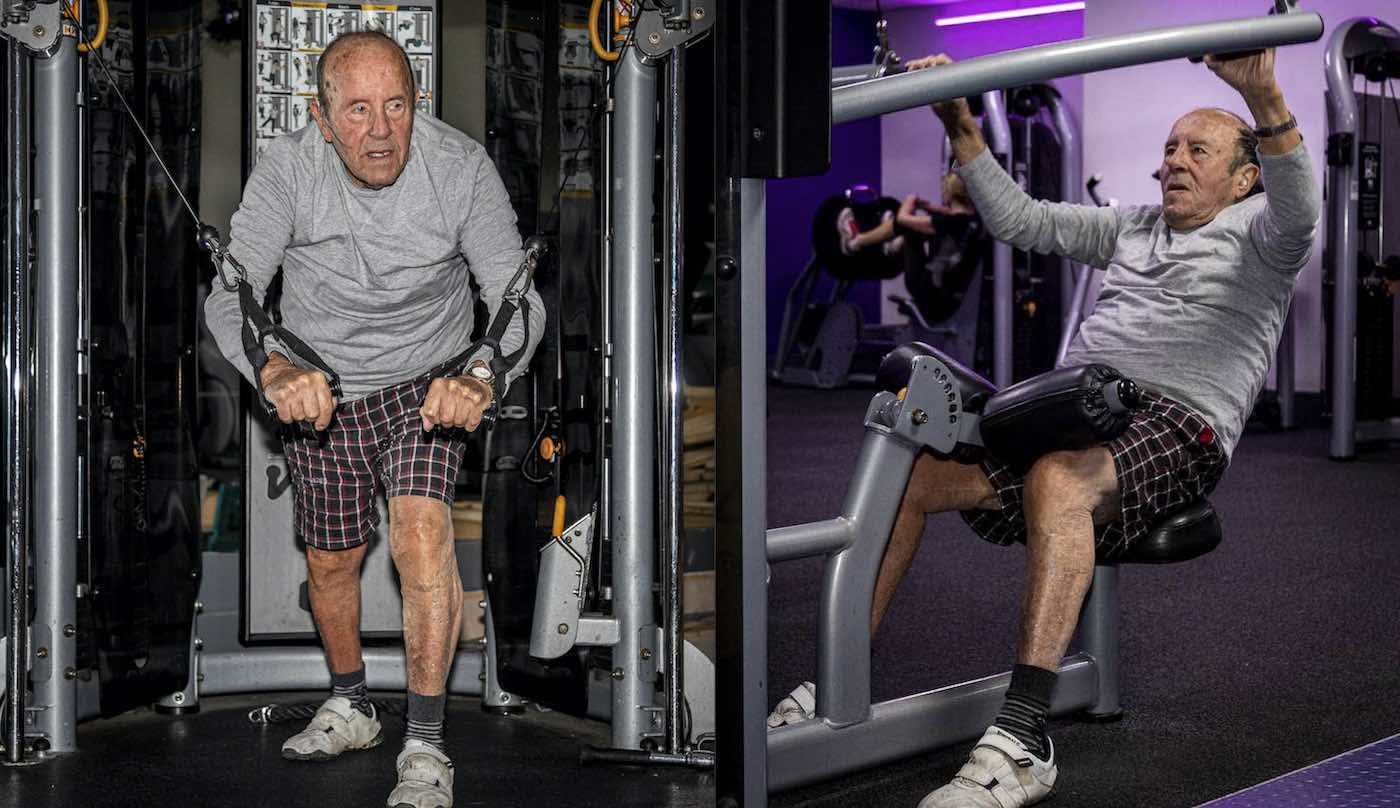 A 94-year-old retiree still hits the gym twice a week to fit in a two-hour workout, and has no plans to stop.

“Super” Mario Sanna considers the gym a “second home,” and the gym rats there his “second family.”

The former railway engineer said his job laying train tracks kept him in good shape, but he fell in love with the gym when started going to stay fit post-retirement.

That was 30 years ago. His normal rigorous workout routine includes exercise bikes, rowing machines, leg presses, and biceps curls, but he’s not beyond a pilates class.

“I use everything the gym supplies—any type of machinery, from spinning classes to lifting weights and going on the walking machine,” said Sanna. “In my opinion, the body needs to be moving. I probably keep moving even when I’m asleep. It’s a machine itself. If you leave it idle, it begins to deteriorate.”

If the name didn’t give it away, Sanna began working for British Rail in 1954 after arriving in the UK from Sardinia, Italy two years earlier.

And during those early days, the physical exertion he needed to shift hefty tracks around had been enough to keep him in top shape.

When Mario finally downed his tools in the early 1990s, he recognized he needed a new way of staying fit and got his first gym membership.

Only an eye condition prevents him from driving to the gym as frequently as he’d like. He’s hoping to return more regularly after an operation, but for now a friend picks him up on Friday and Monday.

“I worked every Sunday because I was getting married, and I needed a lot of money at the time,” he recalls. “It was very manual work all the time.”

“I always think I need to stretch my legs as they’re carrying the rest of my body, and that’s one thing I’ll treat as the number one,” he said, detailing his normal routine. “Then I’ll do the other parts of the body—from legs to the arms.”

MORE LIKE THIS: Grandma Lost 250 Pounds and is Now a Bodybuilder After Saggy Skin Removal

“I also do Pilates and anything that helps me to be physically more fit than I am now. I’ll also lift a 25kg bar, and I go on the cables. I’ll normally spend between one and two hours at the gym. But if the coffee machine is working, I might stay two and a half hours.”

In America, there’s a shifting focus in senior healthcare away from cardiovascular exercise like brisk walking or swimming and towards weightlifting, which can not only elevate your heart rate like an execising bike, but helps maintain bone density and fight off muscle atrophy.

Mario said he regards the friends he’s made at the gym as a “family” and recently celebrated his 94th birthday with a group of them.

“They all wish to see you all the time. It’s like a family,” he said. “For my birthday they had a party—and this is the place. They celebrated it here.”

Mario said he was the oldest person that uses his gym, but recommended other oldies give it a try if they want to keep in shape.

“I think I’m the oldest one. I can recommend it to anybody to do it, especially if they’re on their own, to come out of their house and do something.”

If you don’t believe him, check him out yourself…

SHARE This Inspiring Senior With Your Friends Who Need A Lift…