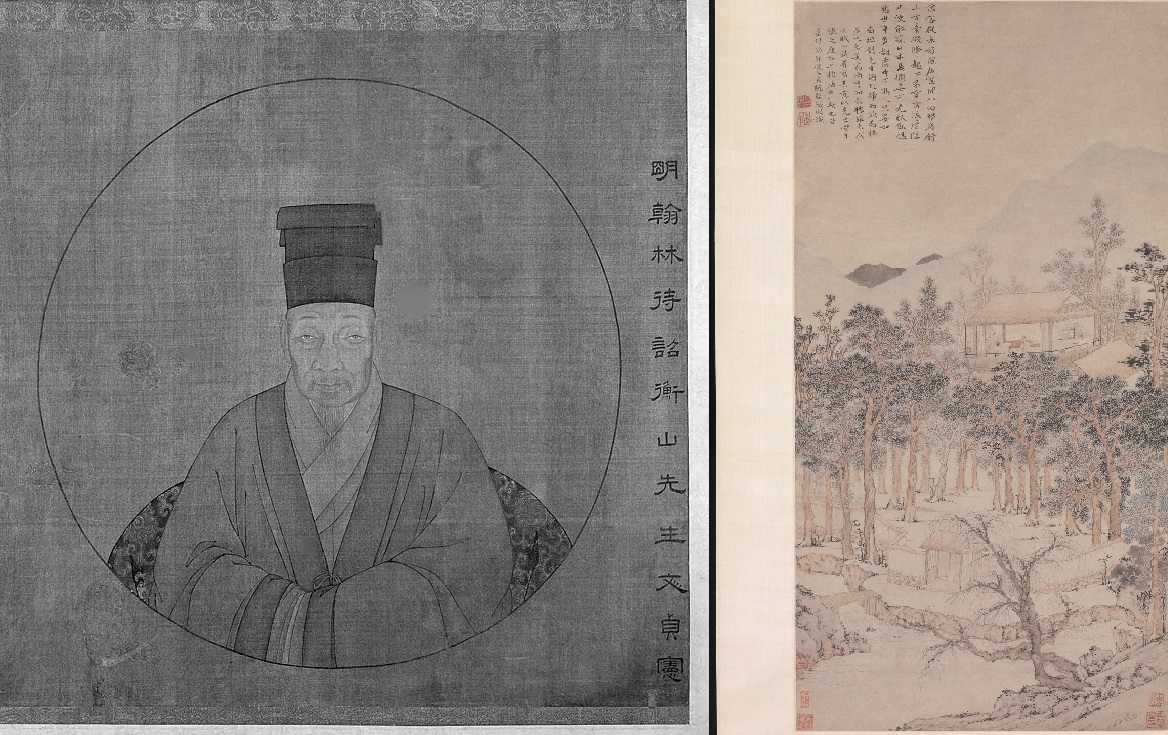 552 years ago today, Wen Zhengmin, one of the Four Masters of Ming painting, was born in modern-day Suzhou. Born to a military family, Zhengmin opted instead to take up the brush, becoming a talented painter, poet, and caligraphist under the Wu School which originated in the area around modern-day Nanjing. He regarded nature and art as inseperable, and while he revered the artists of the past, he never immitated them. READ more about this scholar-artist… (1470)

While he didn’t follow the style of the Song or Yuan dynasties, Zhengmin did carry on the tradition of the persona of a “wenren” (Chinese: 文人). Literally translated into “person of the arts” but is more accurately described as a “scholar-artist”.

He eschewed official sponsorship and was hostile to the politics of the imperial court. Instead Zhengmin and other artists of the Wu School sought private patrons and the respect of their peers. In this Zhengmin was widely successful. His paintings fetched large sums of money from wealthy aristocrats, and a flourishing counterfeit market followed in their wake.

Among his most famous works is an album of 31 views of the Humble Administrator’s Garden, one of the most famous classical Chinese gardens, and is a UNESCO World Heritage Site today.

Happy 72nd Birthday to actor, screenwriter, and director Ed Harris whose performances in Apollo 13, The Truman Show, Pollock, and The Hours earned him Academy Award nominations. Born in New York City, Harris competed in athletics at Columbia University but discovered a love of acting and moved west to study his craft in Oklahoma and Los Angeles. You may also remember his roles in The Right Stuff, The Abyss, Glengarry Glen Ross, The Firm, Nixon, The Rock, A Beautiful Mind, and Enemy at the Gates.

He played U.S. Senator John McCain in the TV movie Game Change, which earned him a Golden Globe Award for Best Supporting Actor. He stars as the Man in Black in HBO’s Westworld, for which he earned an Emmy nomination. WATCH his top film roles… (1950)

And Happy 79th Birthday to singer-songwriter and composer Randy Newman. Best known for his distinctive voice and film scores for 8 Pixar films—as well as Ragtime, Meet the Parents, and The Natural—he was hailed as the greatest songwriter alive by Paul McCartney.

His singles included, ‘Short People’, ‘I Love L.A.’,  ‘Feels Like Home’ (Bonnie Raitt), and ‘Mama Told Me Not To Come’ (Three Dog Night). A Grammy and Emmy Award-winner, Newman has been nominated for 20 Academy Awards and won twice—for ‘We Belong Together’ (Toy Story) and ‘If I Didn’t Have You’ (Monsters, Inc.). His eleven solo albums also landed him in the Rock and Roll Hall of Fame. WATCH his most beloved song… (1943)

And on this day in 1907, scrap-metal dealer Louis B. Mayer opened his first movie theater n Haverhill, Massachusetts. Growing up poor and dropping out of school, he became the co-founder of Metro-Goldwyn-Mayer studios (MGM) in 1924.

Mayer was skilled at developing star actors for his wholesome musicals and dramas, including The Wizard of Oz, Meet Me in St. Louis, Gone With the Wind, and Singin’ in the Rain. WATCH a montage of their famous films…

Happy 93rd Birthday to Berry Gordy, Jr., the record producer, songwriter, and founder of Motown Records. His gift for identifying and producing musical talent, and the careful management of his artists—including The Supremes, Marvin Gaye, the Temptations, Smokey Robinson, Gladys Knight, Stevie Wonder, and The Jackson 5—made Motown music an industry powerhouse, and a musical genre in itself.

For his 90th birthday, Hollywood officials renamed a plaza on Sunset Boulevard as “Berry Gordy Square”, marking the intersection where Gordy moved Motown Records in 1972 after a decade in Detroit when the label produced more than 100 top 10 hits.

Gordy also wrote hundreds of songs (like ABC and I Want You Back for The Jackson 5) and published an autobiography, To Be Loved. WATCH a short video about Gordy and Motown’s rise to fame…