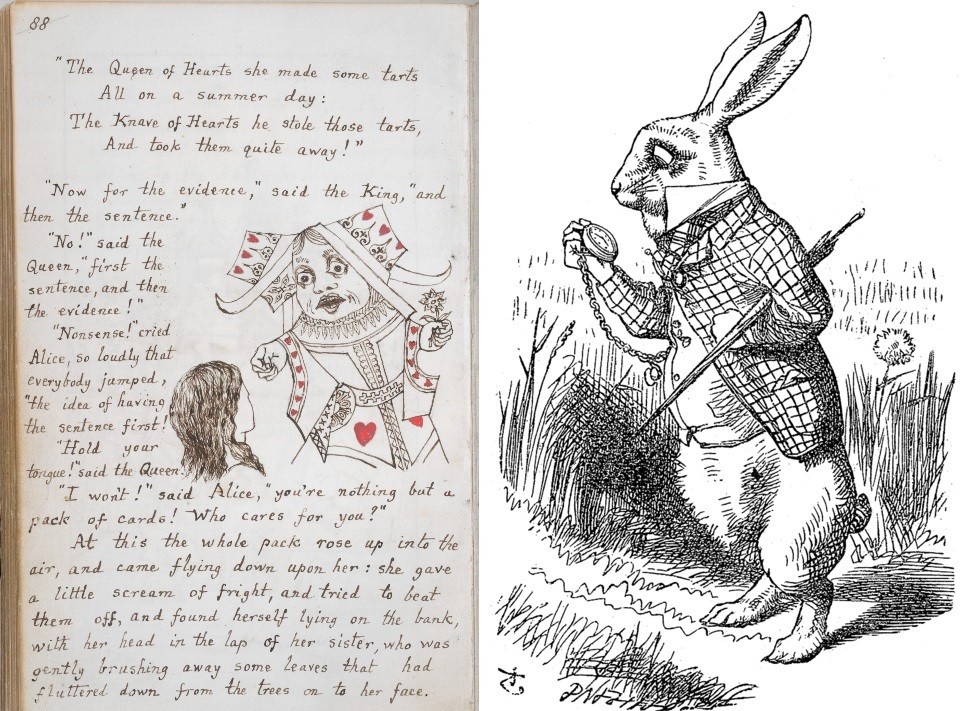 157 years ago today, Lewis Carroll’s Alice’s Adventures in Wonderland was published in America. Since that day, the founding book of the “nonsense genre” has never been out of print, and been translated into 174 different languages. Its legacy covers adaptations for screen, radio, art, ballet, opera, musicals, theme parks, board games and video games. Carroll published a sequel in 1871 entitled Through the Looking-Glass and a shortened version for young children, The Nursery “Alice,” in 1890. READ the story of how it was written… (1865)

A friend of Carroll’s, named Henry Liddel, one day visited in a boat with his three daughters whom Carroll knew. They took a journey from Folly Bridge to Godstow, in Oxfordshire, lasting about 5 miles during which he told 10-year-old Alice Pleasance Liddell a story he had prepared for her called “Alice’s Adventures Underground.”

Carroll had told stories for Alice before, but this one was the first one she had ever asked him to write down for her. She would get a manuscript two-years later.

66 years ago, The Price Is Right game show was first broadcast. With its original host Bill Cullen and announcer Don Pardo, it became the first game show to be broadcast in color. 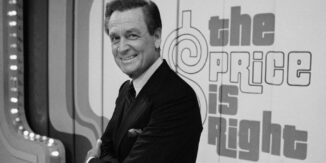 Contestants competed to win cash and prizes by guessing the price of merchandise, bidding as close to a product’s actual retail price without going over. The show was canceled in 1965, but the current version was revived in 1972, with Bob Barker as host. It became a stalwart in the daytime lineup and the longest-running game show in television history with families nationwide watching Monday through Friday… (1956)

Happy 83rd Birthday to Tina Turner, the American rock-and-roll singer who rose out of the South where she picked cotton with her parents.

Happy 77th Birthday to John McVie, the English bass guitarist, best known for his founding role in Fleetwood Mac, the band named for his surname ‘Mac’ combined with that of drummer Mick Fleetwood. Playing together for over forty years, McVie and Fleetwood are the only two members of the group to appear on every released recording.

In 1968, McVie’s marriage to blues pianist and singer Christine Perfect, brought her into the band two years later—and when John and Christine McVie divorced in 1977, the band recorded the album Rumours, a major artistic and commercial success that borrowed its title from the turmoils in McVie’s and other band members’ marriages and relationships. John also was a member of the seminal group, John Mayall & the Bluesbreakers, with Eric Clapton. (1945) 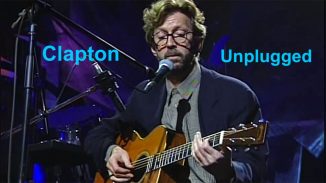 The show on American cable TV aired regularly for ten years—and less frequently since then—with musicians stripping their music back down to its essence and offering their fans some fun covers. MTV Unplugged earned 3 Primetime Emmy nominations, and launched many new albums that became huge hits.

The acoustic format inspired the great 1995 album by The Rolling Stones called Stripped, which contains live tracks recorded live in small venues, including a cover of Bob Dylan’s Like a Rolling Stone. And, it also inspired the 1994 DVD/LP, featuring the Led Zeppelin frontmen, in No Quarter: Jimmy Page & Robert Plant Unledded. (1989)

31 years ago today, American country singer Garth Brooks asked fans to bring 10 cans of food to a grocery store in exchange for a lottery envelope, some of which contained tickets to see Garth at a forthcoming show. Over 10,000 cans were donated to charity. (1991)

And on this day in 1988, Russian cosmonauts aboard Soyuz 7 took into space a cassette copy of the Pink Floyd LIVE album Delicate Sound Of Thunder four days after its release. Playing the concert performance while in orbit made Pink Floyd the first rock band to be played in space. David Gilmour and Nick Mason both attended the launch of the spacecraft and the cassette was still aboard three years later when Mir burned up on re-entry. 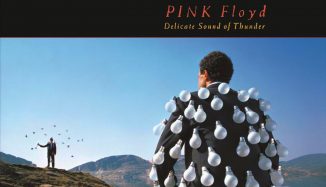 Recorded during five nights at the Nassau Coliseum on Long Island, New York in 1988 during the Momentary Lapse of Reason tour (sans Roger Waters), fans call this one of the best live albums available from the band in any form—particularly its version of Comfortably Numb. The recording, which was also packaged as a video, also includes the classic Floyd hits Shine On You Crazy Diamond, Time, Wish You Were Here, Us & Them, Money, and Another Brick In The Wall. (Watch the mesmerizing clip of On The Turning Away)