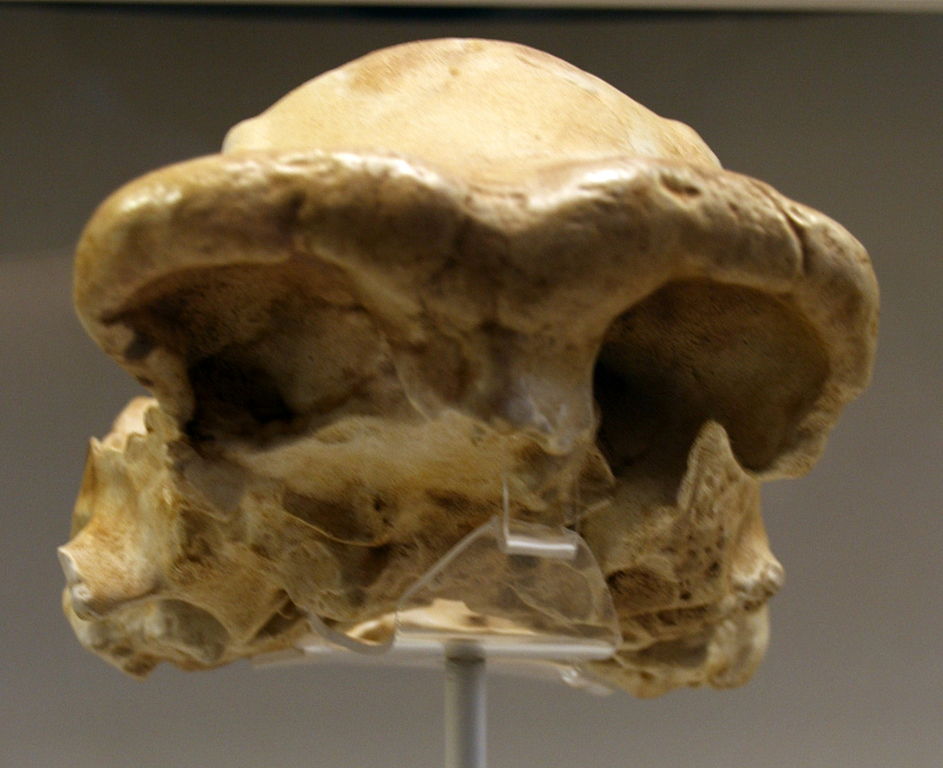 62 years ago today, Olduvai Hominid 9, or the Chellean Man, was found in the Olduvai Gorge of Tanzania. A fossilized skull cap from the cranium of a homo erectus, the fossil was found by paleoanthropologist Louis S. B. Leakey and originally named after him as a new species. This has subsequently been revised, and “OH-9” is now considered homo erectus. The taxonomic bickering didn’t take away from the fascinating uniqueness of the fossil however, and debate remains as to just what sort of human it was whose cells created it. READ why it’s fascinating… (1960)

Two noteworthy aspects of the cranial remains have challenged scientists every since. The first is the extrapolated cranial capacity. Estimated at 1067 cm3, OH-9 had the largest brain cavity of all known African homo erectus specimens.

Furthermore, OH 9 had a robust brow ridge that allowed it to stand out among other H. erectus. The brow ridge made it difficult to determine whether the cranium should have been classified as H. erectus or a different species. Since cranium thickness and the OH 9 cranium capacity is larger than any found, it explored the idea of different forms of H. erectus from different areas due to migration, leading to the Out of Africa hypothesis.

68 years ago today, the U.S. Senate voted 65 to 22 to censure Sen. Joseph McCarthy, the Republican from Wisconsin, for “abusing” colleagues during his four-year anti-Communist crusade—a witch hunt that ruined the careers of many writers and artists.

It was U.S. Army counsel Joseph Welch (pictured, left) who finally confronted McCarthy six months earlier, during the Senate hearings investigating Communist activity in America, by saying, “Have you no sense of decency, sir? At long last, have you left no sense of decency?”  At that point, the Senate gallery erupted in applause for the only brave soul to have finally stood up in the Congressional hearings against the “Red Scare” that had paralyzed the nation’s psyche. (1954)

Also, on this day in 1950, I, Robot was first published by the writer and biochemist Isaac Asimov. A collection of science fiction short stories and essays woven together into a novel, I, Robot was the first time Asimov’s Three Laws of Robotics appeared, making robots more engaging for the reader and revolutionizing the science fiction genre.

The book’s narration features a reporter in the 21st century hearing each of the stories from a fictional Dr. Susan Calvin, about the interaction of humans, robots, AI, and the morality of it. WATCH a fascinating 1975 interview with Asimov…

52 years ago today, the U.S. Environmental Protection Agency opened its doors. Created by Republican President Nixon in response to heightened public concern about deteriorating air and water, and increased toxins in America, the federal agency went on to ban DDT, phase out leaded gasoline, and halt the use of cancer-causing PCBs.

The EPA also launched the Brownfields Program to clean up abandoned, contaminated sites, transforming them into productive community assets. Its 1980 Superfund program taxed chemical and petroleum industries over $1.6 billion for cleaning up abandoned or uncontrolled hazardous waste sites.

In 1992, it launched the Energy Star program to promote efficient home appliances. Under George W. Bush, it established new regulations requiring truck diesel engines and the fuel to be more than 90 percent cleaner. WATCH a video… (1970)

And 76 years ago today, fashion designer Giovanni Versace was born in Italy to a dressmaker mother. Known for his flashy prints, revealing cuts, and bright colors, Versace designed for famous clients, such as Elton John, Michael Jackson, Bruce Springsteen, Cher, and Madonna.

He chose Medusa as the brand’s logo—a design that was on the floor of Roman ruins where the Versace siblings played as children—because she made people fall in love with her with no way back, and he hoped his company would have the same effect on people.

A book by his sister Donatella, who now runs the company, tells the colorful story of the Versace brand, which had added a fragrance and luxury home goods line before Giovanni was murdered in 1997. WATCH a mini bio to see all the fashion and tragic ending… (1946)