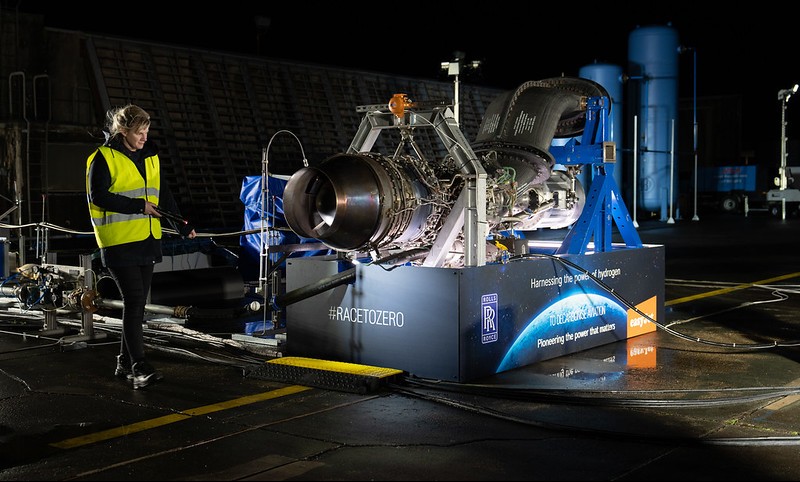 Rolls-Royce and easyJet yesterday confirmed they have set a new aviation milestone with the world’s first run of a modern jet engine on green hydrogen fuel.

The ground test was conducted on an early concept demonstrator using green hydrogen that was created by wind and tidal power. It marks a major step towards proving that hydrogen could be a zero carbon aviation fuel of the future.

Both companies have set out to prove that hydrogen can safely and efficiently deliver power for civil jet engines and are already planning a second set of tests, with a longer-term ambition to carry out flight tests before the end of the decade.

The partnership was inspired by the UN initiative Race to Zero that many companies have signed on to in order to try and reach zero emissions from operations by the mid-century mark.

As of now, most renewable or green aviation fuels have been made through vegetable oil, or other biological fuels. Hydrogen however is considered to be the only way to fully-decarbonize the aviation industry which accounts for about 3.6% of global greenhouse gas emissions.

Small aircraft can be electrified with batteries, but large, long haul jets need a liquid fuel that burns slowly and can be refueled fast.

RELATED: Researchers Pull Carbon Out of the Sky And Convert it to Instant Jet Fuel, Reshaping Aviation For Good

Rolls-Royce and easyJet used a converted Rolls-Royce AE 2100-A engine powered by hydrogen fuel produced through the currently prohibitively-expensive method of electrolysis at the European Marine Energy Center on the Orkney Islands.

Governments including the UK, but also the US and Australia, are investing heavily in green hydrogen, as it promises to be the only currently workable alternative to diesel or kerosene for things like passenger jets, freight trains, and long haul trucking.

SIMILAR: Carbon-Negative Plant Opens in Turkey Turning Algae Into Bio-Jet Fuel and So Much More

EasyJet are investors as well, and hope to be totally decarbonized by 2050, as they only operate short flights, most of which are inter-European.

“We are committed to continuing to support this ground-breaking research because hydrogen offers great possibilities for a range of aircraft, including easyJet-sized aircraft,” said Johan Lundgren, CEO of easyJet. “That will be a huge step forward in meeting the challenge of net zero by 2050.”

FLY This Story Over To Your Eco-Loving Friends…