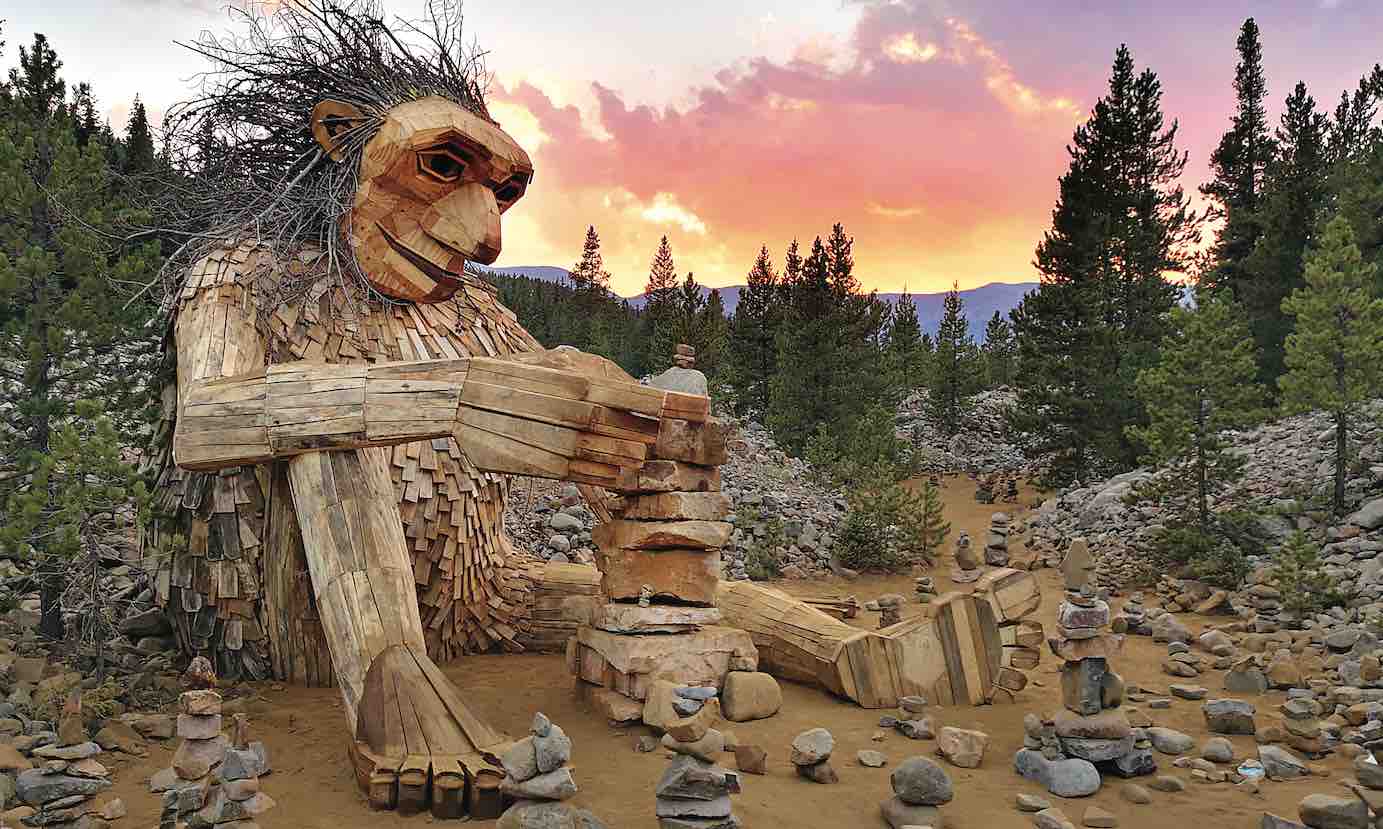 Far out in Western Australia, the tranquil wetland forests are about to shake with the footsteps of giants.

That’s because a Danish artist has built a community of giant trolls out of recycled natural material for an exhibit that weaves Aboriginal tradition, modern eco-consciousness, pure childhood creative expression and joy together.

Thomas Dambo is the mastermind behind ‘Giants of Mandurah’, a cultural tourism attraction set in the Mandurah region of Western Australia about an hour south of Perth. The giant trolls, named Little Lui, Vivi Cirklestone, Seba, and Santi Ikto, are all made of recycled wood, just like the dozens of other giants that Dambo has built in forests around the world.

Their limbs are made of pallet wood, their bodies and other more detailed features are chopped up cast away furniture. Together they tell the creation story of the Bindjareb Noongar people, and the waterways and wetlands of their home.

“I grew up surrounded by fairytales and stories, and the troll is an important part of Danish folklore,” Dambo told The Guardian.

“For me, trolls represent the voice of nature. Sometimes they can be gentle and quiet. Other times they can be really violent and brutal, and that’s how nature is. If you’re not careful, nature will knock your whole house over.”

Each one took about 750 hours of work to construct, but Dambo had the hand of some volunteers, and completed all the work on site to allow the inspiration and energy of nature to drive the team on.

“Why build in a warehouse if you can build here? It’s the best office in the world,” he said. “And coming from Denmark, the nature here is so different, it’s almost a bit trippy and unreal, like being in a fairytale.”

Stemming from a childhood spent obsessively building things in the yard, amongst his theater seamstress mother and blacksmith father, Dambo’s adult creations can be found in China, Wyoming, Colorado, Maine, Copenhagen, Chile, and beyond.

But it was the beautiful natural scenery of Mandurah that drew him in particular to this spot.

“Mandurah is a city renowned across Australia for its natural beauty, making it the perfect home for Thomas Dambo’s celebrated artworks,” said Mayor Rhys Williams.

“Thomas’ unique approach to promoting the protection of the natural world fits beautifully with our Mandurah story, and we feel very privileged to be part of such a special project.”

SIMILAR: Monumental Animal Sculptures Made From 35 Tons of Plastic Collected on Oregon Coast by Volunteers–LOOK

He’s even fashioned it into a game, called the Rhythm of Raindrops which is a little like the plotline of an Indiana Jones movie, involving searching for clues to the location of a hidden giant.

The entire art installation was produced by FORM — Building a State of Creativity Inc., which has produced and deliver cultural projects all around Western Australia for decades.

Here’s another troll hiding in the U.S., in the state of Maine—because we just can’t get enough of these creations!

MUST-SHARE These Exciting Giants With Friends On Social Media…